Another successful  Endurance World  Motorcycle Championship event  for the Slovak  team Yamaha Maco Racing. After the  4th  place in  the 24-hour race in Bol d´Or, the initial event of the series,  the team was doing very well also in the second French 24-hour race in Le Mans and in spite of minor difficulties, it  ended  up on the excellent 8th  position.   In the ongoing  ranking of the series, the team is on the 6th  position   as the most successful  private team in the chart. 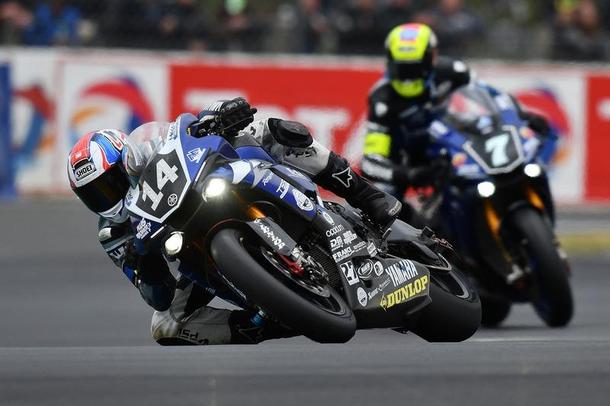 During the training time, the  well-established and successful trio of riders  – Marko Jerman, Greg Junod and Anthony Dos Santos, together with the whole team, tried their best to prepare the motorcycle for the race, the proof of which was also  the 19th position on  the starting grid. After  start of the race, the team´s    Yamaha appeared in the classification steadily on higher positions  and with  the fall, the Slovak team was already on the 10th position.  However, exactly in the quarter of the race, the motorcycle had a failure and the repair caused  a loss of seven rounds and six positions  in the rank. Thanks to the  concentrated ride, the team managed to move up to the 9th position, but due to  health problems of Greg Junod, the team had to continue with only two  riders – rather a difficult situation    11 hours before the end of the race.  But  the team managed to achieve the goal to remain in the Top 10 and in the end of the race,  the team, already with Junod,  reached  the 8th  final position.

„We concentrated our strategy for the 24-hour race in Le Mans  particularly  on the night part where we wanted to move up  as high as possible in the ranking by using the   entirely new engine with lower consumption.   However, in the quarter of the race, we had a small technical problem and due to its repair, we lost seven rounds and we fell from the 10th   to 16th position. Although it was not easy  to resume  the lost position because the   competitors ahead  did not make  any significant  mistakes, we gradually managed to ascend    to the 9th position. But at 4.00 a.m., Greg Junod fell out due to sudden health problems,  and we had to face a ride with only two  pilots. Therefore, we only  concentrated on maintaining  the position with the aim to endure to the end. Luckily, Greg Junod  recovered before  the end of the race and  intervened in the fight.  Thanks  to that, we managed to reach  the 8th place  and the result makes the whole  team very happy.    During the race, we also wanted to gain bonus points   but we succeeded only after sixteen hours. Yet, it helped us  reach the 6th position in the  ongoing  ranking  of the Championship, and  we are the first from among  private teams. I would like to thank the riders for their  excellent performance and also the whole team for their diligent work  during the  winter  on preparation of this event. In the end,  the success  showed up.  I would  also like to thank  our partners and all our fans who kept their  fingers crossed  both in  Le Mans and  at home.”

The World Championship continues on  May 20, 2017 in  Oschersleben, Germany  as 8-hour race.