Opening motorcycle event World Endurance Championship was held on April 26 at the French circuit of Magny Cours as the 78 year of the famous 24 – hour race Bol d’ Or. Event was also attended by Slovak Maco Racing Yamaha team, which last year in the World Championship achieved the overall seventh place and traveled to France to gain last year’s successes. 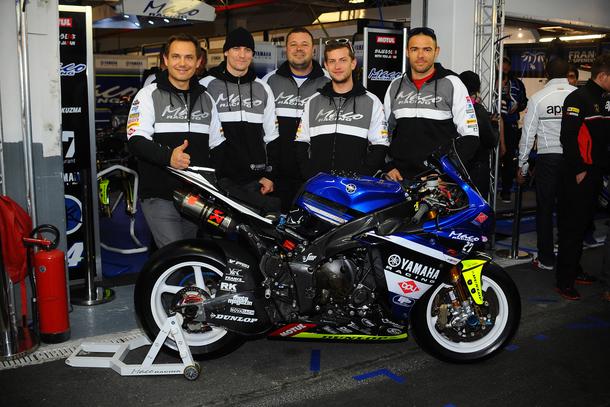 In this motocycle  event the Slovak team introduced Didier van Keymeulen , Belgian , who has in his career to his credit overall victory at the World Cup Superstock 1000 category and also two of our acquaintance riders , Pole Pawel Szkopek and Slovenian Marko Jerman . As a substitute traveled to France Slovak rider Tomas Krajčí and surprised excellent qualification times.

Reaching the twenty place in qualification for the Slovak team in 24 –hours race started van Keymeulen that very quickly got itself ahead and came in to the top ten  and in the first hours of the Slovak team riders moved to the fifth to seventh place. This lasted until the fall Pawel Szkopka , followed by repair of the damaged motorcycle. Thus came our representatives the opportunity to fight for the front rung, but in the game was still points in the evaluation of world class championship EWC . Objective finally Slovak team reached 18th place, but in class the EWC carried out the goal, when he became the eighth rung.

Martin Kuzma, owner of the team:
We had a busy week, everything started testing right at the scene of where we prepared and motorcycles during the official practice race we had just tweaked the details . In qualification we went sure, we had to hurry and we belonged 20th place on the grid. The race was taken off the rain and that is what our motorcycle suit, we showed our work, which we bestowed in training machine settings for different weather conditions. After the start we moved upwards and although conditions made still worsen, we were doing better and better , when we moved to the 5th-7th place, according to the box stops. Unfortunately Szkopka had crash , motorcycle smashed into the barriers and the other shall be reflected on track.  Fortunately, Pawel remained unhurt and the motorcycle managed to deliver to the box 20 minutes later. The mechanics had a lot of work, the machine has been properly ruined, and after returning to the track, we concentrated only on the battle for the most points in the world championship. The basis was not risking, distance conditions were still bad, excepting the water was polluted by oil and gasoline into that darkness and the temperature of seven degrees Celsius. We did not avoid one more fall at night and followed next correction, but in the end we achieved the 18th place, but more important is the eighth place, and points to the evaluation Class EWC . We wanted to achieve more, of course, but in these difficult conditions, which buried the hopes also in favourite teams, we finally enjoyed the profits points. My thanks to the whole team of mechanics, racers, and very pleasantly surprised by our substitute Tomas Krajčí , and thank all our partners, through which we can ride this championship and fans who motivate us for further work .