The Yamaha Maco Racing Team achieved a fantastic podium at round 3 of the EWC (World Endurance Championship) event in the 8hrs of Oschersleben. After the excellent 4th place in the previous season’s events at the Bol d’Or’s 24hrs, and 8th at Le Mans 24hrs the team was able to maintain its position in the overall standings. Currently in 6th place in the EWC championship.

Marko Jerman, Greg Junod and Anthony Dos Santos, competed from 14th place on the starting grid, and at this time it was mostly down to tactics from practice & qualification, especially as they were preparing a motorcycle for the race. 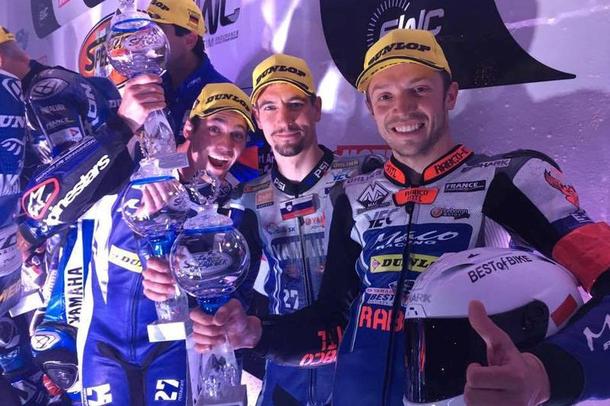 The start of the race was in Marko´s Jerman hands, and he did an excelent  job from 14th place on start grid,  Marko was already in 6th position going into the first corner. More drama & better results were to come on the track and also when the Slovak team worked up to third place, but this was not easy as all the riders had to fight with four other teams & riders. The Bolliger’s team was the biggest competitor of the Maco racing team but they had to give up a few minutes before the finish, thanks to the tactical fuel economy and lower number of stops, earned Maco Racing the third place. Maco Racing were the most successful private team! This helped Yamaha to obatin the perfect result, and lockout all the other manufactures on the podium.

With this result, the Yamaha Maco Racing team remains at the top sixth place in  overall ranking as the most successful private team. The success achieved is, moreover, a great invitation for Slovak motorists to attend the next World Championship, which will take place on June 24 for Slovakia Ring for the first time.

“We are very happy! From the beginning, it was a weekend for us, we also got qualifiers where we did not go anywhere again and securely got off the 14th place on the grid. The races themselves were very demanding and exciting, we could not afford to make any mistakes and at the end we were already in the Lottery. We gambled that we will have to save fuel so we did not have to refuel again, but it was tight, it could have gone the other way because there was a minimum of fuel in the tank… Riders on the track, with the quick changes and preparation of the motorcycle, was done excellently, 100% without one single mistake and the result is unique to us. Every one of my team and to all of our riders My Greatest thanks, as well as to our partners and fans, so we have the best invitation to the next championship races to take place in Slovakia.”