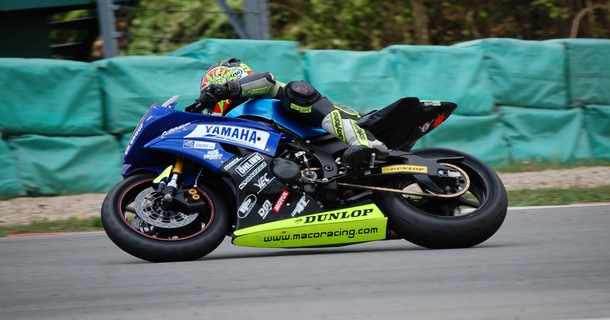 Highest expectations had team in Superbike class, where Swiss rider Gregory Junod wanted to fight for the best position in the front of the grid. Unfortunately, in Saturdays qualification was raining and team had a crash after which was motorbike seriously damaged. Mechanics managed to repair the bike but Gregory woke up on Sunday with body temperature 39°C and team did not want to risk his or his opponent’s safety. Junod did not start in Superbike class.
In same category also started with highest ambitions in Slovak Championship Miroslav Sloboda, who finished 21st , 3rd in Slovak Championship. After two rounds is currently 2nd. In Superstock 600 category sat again on Yamaha R6 17 years old Jakub Jantulik, which showed his great potential again when he improved his lap time by 7 seconds and during the race he was able to do same lap times as the fastest rides. In competition between 30 riders finished 11th, but most important is his big potential.
Next round of UEM Alpe Adria Championship will take place on 3rd June at Hungarian circuit Pannoniaring.