UEM Alpe Adria Championship did continue last weekend of July in Poznan, Poland. Yamaha Dunlop Maco Team did participate with Swiss rider Gregory Junod and Slovak rider Miroslav Sloboda, who both fight for points in Superbike category. For Slovak team was this round very succesfull. 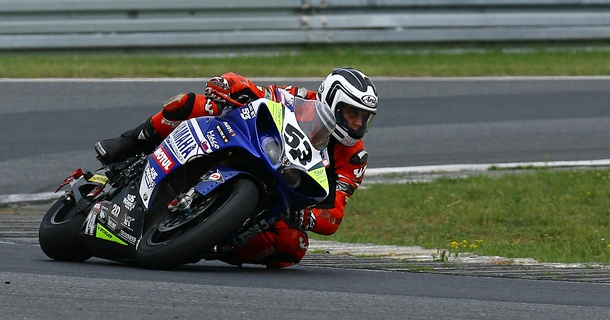 Free practice and qualification were during nice and sunny summer weather. Junod was 6th and Sloboda 17th fastest. On Sunday weather sudenly changed and mostly affected Superbike race, which was red flagged after 7 laps out of 16. Race got restarted for 5 more lap on wet track. Race got affected by many riding mistakes and most succesfull was rider of Yamaha Dunlop Maco Team Gregory Junod who got his first victory in Alpe Adria Championship! In overall clasiffication is 4th even after 2 races without points. Whole team worked for 100%, Yamaha bike was great prepared and team could also rely on Dunlop tires.

Very succesfull was also Miroslav Sloboda, who went around chequered flag as 8th. That means 2nd position in Slovak Road Racing Championship and still have chance for championship victory. UEM Alpe Adria Championship will continue in Rijeka, Croatia on 18th and 19th August.