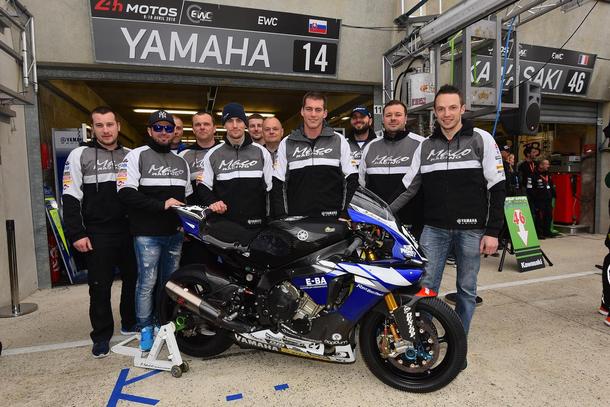 As competitors in the Slovak Yamaha team presented : Marko Jerman from Slovenia, Swiss Gregory Junod and domestic rider  Anthony Dos Santos. All three have  already great experience with  Yamaha Maco Racing Team and it was visible from the first training. For the all   EWC teams was  waiting extremely unpleasant weather, cold and rain affected not only training, but also during the race, when overnight temperatures dropped to a value of zero degrees Celsius.

During qualifications in Slovak team chose traditional security tactics that marked the 18th place on the grid. Gregory Junod was the rider who made a start procedure in Le Mans. Just after  the start of the race on a team motorcycle  was some electronics  problems so Gregory Junod  moved back to the end of the starting field…. This  problems with electronics eventually accompanied by Slovak team until the end of the 24-hour race.

However race  become extremely  because  mentioned problem keep continued but after few hours was clear that Maco racing  riders  are not only attacking riders in the points positions, but also  they catch place in the TOP TEN! Game nerves highlighted, more rain at the very end of the race, but excellent 10th place in the overall  and 6th in class EWC for the Slovak Yamaha Maco Racing.

“It was a great fight. From start to finish we had problems with the electronics that worked only alternately. They then emerged other problems and we were loosing time during the pit stops , as we always had to reset the control system. But I am extremely happy that ours great  three riders , as well as every member of the team to maintain maximum concentration, nobody give up…. because they all saw a chance that actually existed. Finally at the end we all  together  manage  an excellent result and I am grateful to every one on the team because they all worked for more than one hundred percent. I also want to thank all our partners and fans who help us and keep their fingers crossed.”

Other Events World Championship will take place as the 12-hour race in Portimao, Portugal. Thank you!