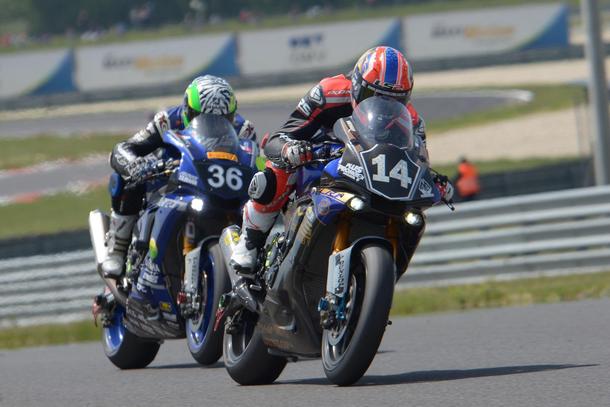 The owner of the team Martin Kuzma for their fans prepared a literally delicacy, when in these races to agree on cooperation with the star in the endurance championship, 6 th times winner of the 24-hour races of Le Mans and BOL d’or, the Frenchman Grégorym Leblanc. In addition to Leblanca on Yamahe the Slovak team driving the Austrian Julian Mayer and Frenchman Anthony Dos Santos. The first free practice at the Slovakia Ring took place already on Tuesday and for the Maco Racing Team was literally a disaster. Two crashes and two broken motorcycles predicted affliction, that on the Slovak team is waiting. Problems culminating shortly after the start of the 8 hours of the race, when he had to Leblanc go into the box with a disorder of the fuel pump. After repair continued to team with a loss to last place, but thanks to the hero performance was at the finish line, finally, on 14. place overall and 7 th within the category of EWC.

“After the problems we had in Le Mans, we know that we need change and we agreed therefore on the Slovakia Ring in collaboration with Grégory Leblanc. Everything we have prepared for the home race, unfortunately, already in the Friday in free practice will give us the whole plan crumbled when we as a result of the falls came on two motorcycles. All this, in turn, affect the following qualifications and race, and also the atmosphere in the team. For the race we had a plan to gradually move the to the front, but already in the beginning of the race we had a problem with low pressure fuel and for the repair, we lost a few rounds, so then we just had a loss and slide on the upper position. Finally it stopped at 14. the place, which was the maximum we could achieve.

Thank you to all members of the team for their HARD work, also to our partners and all fans, that even in the difficult times they are behind Maco Racing Team. It will be better…… THANK YOU”