Slovak Maco Racing Team did attend at last weekend at next round of Endurance World Championship in Germany as 8 hours of Oschersleben.

Swiss Gregory Junod and French Gregg Black were joined on Yamaha bike by French rider Lucas de Carolis. How soon turned out, his arrival was a major contribution and his performances were also good motivation for the two other riders. Also the technical preparation of the motorcycle has proved as correct when the team, also thanks to the use of new components, belonged excellent 7th place at starting grid. The only trouble was a crash of Lucas, who had to avoid slower rider during qualification and went into the gravels.

During the race, after very successful start of Gregory Junod, bike had problems with electronics and during repairing team lost few laps. After repair all three riders did continue to gather lost positions back. However, the premature end of Maco Racing Team came after 4 hours, when chain broke and destroyed engine casing too much to be repairable.

After the weekend I have very good feeling because we did big progress. Changes that we did, did pay back, and not only the new rider, which we already agreed with him for Le Mans race, but also the technical upgrades on the bikes, which we used new parts for. Free practices and qualification sessions were without any problems, all three riders did very similar lap times. Actually, Junod did his best time on the race tire. Unfortunately, the race did not went as we hoped, we don’t know what caused the chain to break, we use this chains for a years, it might also been dirt on the track, maybe stone. But despite the fact that we are not happy with the result, we know we made the step right way. The team and also riders did their best, also during pit stops.

I have to thank everybody, of course to the team partners and to the team manager Denisa Greskova, my wife, unfortunately she was not able to make the Oschersleben race. In front of us is last round of season, 24 hours of Le Mans. And because we did not score any points in two rounds now, we cannot get very good result in championship. We will work for 110% in Le Mans and will hope for best result and for bit of a luck finally. 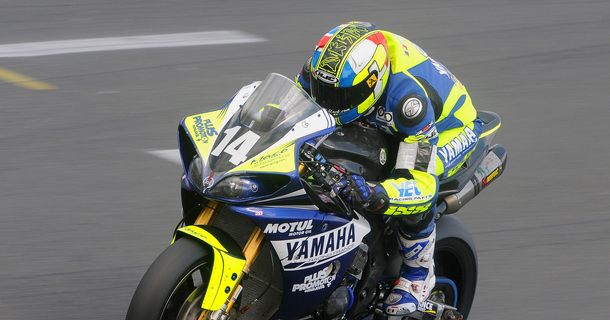