Last weekend was the last race in the Endurance World Championship which took place in France at the Le Mans circuit.  This race would determine the final placing in the Championship for Maco Racing.

The team were well prepared for the event and this was confirmed in qualifying, the team  earned an excellent sixth place on the grid out of fifty five teams competing.  Maco racing‘s qualifying position made them the top qualifying privateer team. The Yamaha was ridden by our three riders,  Gregory Junod, Gregg Black and Lucas de Carolis. 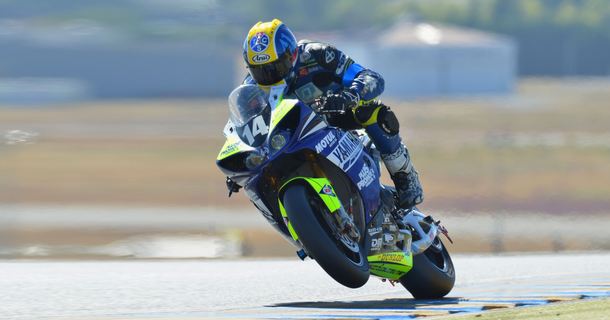 At the start of the race the bike failed to start but Greg Junod quickly recovered the lost time and places. The second rider in the team, Gregg Black also recovered positions and the team were riding in the top ten. Following a fall, the team dropped to 40th position.  Before long Lucas de Carolis also fell as an opponent crashed in front of him and he could not avoid the fallen bike and rider. Despite a large amount of time spent in the pit box due to falls and mecanical problems, Maco Racing gradually moved up the order . At night, shortly before the middle of the race, Lucas de Carolis fell again. This was followed by another big drop due to time spent in the pit box for repairs.  However the Slovakian team, even after three crashes and numerous problems,  did not give up and eventually managed to finish the race in 23rd place. This left Maco Racing in 16th place in their category and an overall finishing position in the World Endurance World Championship of 15th

“In qualifying we showed our true capabilities. Sixth place, the fastest private team, third and second Yamaha using Dunlop tyres, it was proof that we were very well prepared for the event. At the start of the race, we failed, but we fought to improve. Unfortunately, three heavy falls and mecanical problems meant we would not be able to battle for the top ten positions, but we still managed to finish the race. My thanks go to the whole team, partners: company Yamaha Motor France, Japan Yamaha, Dunlop, Motul, France Equipement, Plus Promotion, PP Tuning Rest and DM-Car System.  I’m not happy with the result in the Championship, but we will look forward to next year when we will again be ready and hope to achieve a higher place in the Championship.”