An excellent result was recorded by the Slovak team Maco Racing at the world championship of endurance road motorcycle races, which took fifth place in the eight-hour race in Oschersleben, Germany.
Even the Slovak team did always try…. but for the technical problems in the first three events of the season, he wanted to finish the season with the best result. The championship will end in July with the Suzuka event in Japan, but Maco Racing will not participate

Just like in previous races on Slovakia Ring the 3 French teammates Louis Bulle, Anthony Dos Santos and Alex Plancassagne were the champions.
In the first qualification difficult times becomes for the team because of the incompetent decisions of the technical commissioner makes cancelation of the Q.1 time. In the second qualifiers, the riders won the 15th place on the starting grid among 36 competitions in EWC.

After the start of the race, the trio of riders of the Slovak team gradually rewrote and a great ride and the work of the mechanics eventually led the team to an excellent eighth race in the fifth place. Thanks to this result team jumped overall to the 17th place of the world championship season 2017/2018.

Martin Kuzma, Team Owner:
“Preparing for the race in Oschersleben went smoothly, everyone in the team felt great responsibility and pressure, as we experienced many difficulties in to this EWC season.
Everyone was ready and motivated to 110 percent. The skill plan was not to push hard just race with comfort and with confidence we took overall the 15th place at the starting grid.
We have planned the races in very small details. In the beginning we had a bit of a problem with the tire grip, but I knew that as the air temperature would cool, it would be okay. The goal was to place in the top 6, so the goal was certainly fulfilled. Thanks to our partners and fans for great support!” 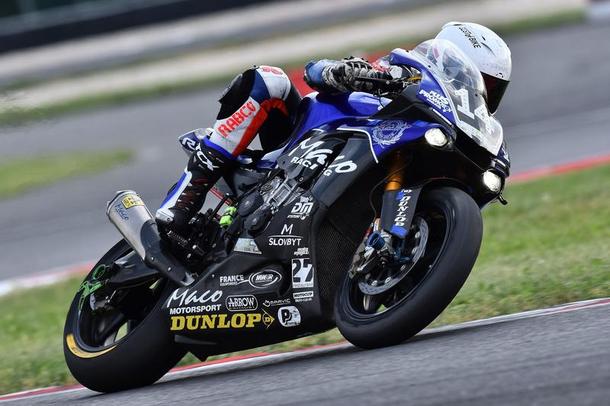