The 11th – 12th September saw the 74th runningof the Bol D’Or 24 hour race at Magny Cours in France. After scoring no championship points at the previous outings at Le Mans and Albacete, Slovak team, Maco BK Racing were looking to put their bad luck behind them.
63 teams began qualification. The Maco BK Racing team rider line up remained unchanged with Jason Pridmore, Danni Ribalta and Victor Carrasco. During Friday morning qualification Victor had a major crash, leaving him with serious leg injuries and the bike completely destroyed ( again ! ) The team had qualified comfortably for Superpole but with only the race motorcycle left in the garage, Pridmore settled for a sensible and safe 20th place.
Race day morning warm up saw Polish star Pawel Szkopek drafted into the team for the injured Carrasco.
At 3.00 pm 57 teams started the race, Maco BK Racing with Danni Ribalta on board. After one hour the team were 11th, after 3 they were 8th, before a stone punctured the radiator. The 17 minute stop dropped the team to 24th place, but only 20 minutes later Pawel crashed on oil dropped by another bike.
After a 10 minute repair the race was rejoined in 29th place only for another stop to replace a damaged engine case to drop the team to 31st place with 18 hours to go !
The riders sped through the night, steadily climbing through the rankings, and by first light were in 13th place. Eight hours later at 3 pm on Sunday, an exhausted Jason Pridmore crossed the line in 9th place, 6th in the EWC class.

Denisa Greskova, Team manager
“ We are very happy with this result in this very demanding event. Despite the accident in qualifying and the incidents in the first quarter of the race the team showed great strength to achieve a top ten finish. If we had not had our problems in the first 6 hours our pace was good enough to achieve a podium finish.”
“I would like to thank all our sponsors and partners for their support, all our team members for their efforts in producing a safe and reliable motorcycle and 28 perfect pit stops, and to thank our riders for a great job. I am especially pleased for Pawel who rode with us for the first time. The whole team wish Victor a speedy recovery. When the championship moves to Qatar in two months time we will look to improve our World Championship position.“ 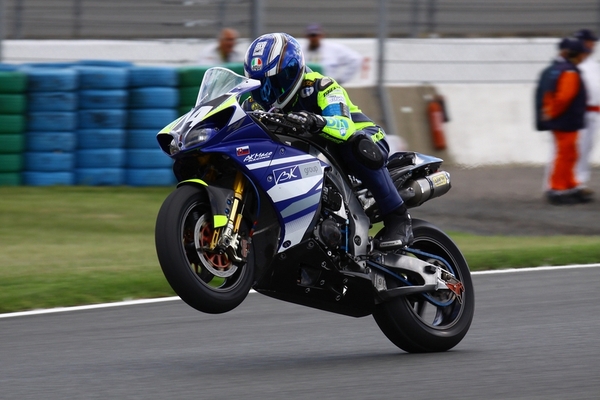